The Financial Conduct Authority recently reported that between 2018 to 2020, advice was sought regarding £30.3 billion of Defined Benefit (DB) pensions. Of this, £20.1 billion was advised to transfer out of the scheme into a defined contribution (DC) scheme such as a SIPP, and £10.2 billion was advised to not transfer. The average fund size for those advised to transfer was £405,178 vs £267.814 for those advised not to. But what is a pension transfer and why is it still so popular, especially amongst those now living abroad?

To understand this, we first need to look at the difference between a Defined Benefit (Final Salary) scheme and a Defined Contribution scheme.

The difference between Defined Benefit and Defined Contribution

With a DB scheme, as the name suggests, the benefit is defined, it is not a pot of cash that is yours, rather a pool of assets (fund) that supports a promise to you from the scheme to pay you a benefit under a given set of terms. This fund may grow or shrink depending on how much is being put in it, how it is invested and how much is being paid out from it, but your promised benefits generally do not change in relation to that.

For example, company scheme X promises to pay an employee/ex-employee (member), £10,000 per year from the age of 65, increasing in line with inflation. They may also promise that in the instance the member passes away, there will be a provision to continue paying a benefit to a surviving spouse. This is typically 50% of the amount they were paying to the member.

In order to support these promises, the scheme maintains a pool of invested assets that will fund the benefits payable. Each scheme has their own way of calculating what benefits they oblige themselves to, to their members. This is usually based on the time someone worked for the company and the amount they where getting paid whilst they worked there.

When a member wants to leave the scheme, they will be offered a ‘transfer value’. This can be calculated differently by each scheme, but in simple terms it is what that scheme deems to be the size a pot of cash would need to be in order to compensate the promised benefit that member is giving up by leaving.

Following on from the previous example. If the member of company scheme X asked to leave that scheme, they would try to calculate an amount that he would need as a personal pot to receive the same benefit of £10,000 a year that they were promising him. This is a complicated calculation that looks at age, the current benefits promised, Gilt yields (UK government bond interest rates) and potentially other factors. For more on this calculation process you can read our article on CETV (Cash Equivalent Transfer value) calculations here.

Unlike a DB scheme, with a DC scheme it is the contribution not the benefit that is defined. This means that there is a pot of cash/assets that is yours, and the amount of benefit you can get out of that will vary depending on the size of that pot and how it grows or shrinks.

There are many reasons for people’s decisions, but the main things people consider when contemplating a pension transfer are:

1. Their attitude to risk

Risk is an important factor as the risks are different for each type of scheme. The risks associated with a DB scheme are generally considered to be less as the performance of the fund doesn’t necessarily impact the benefits the member will receive. In some instances however, pension scheme funds can become incapable of meeting the obligations they have made and therefore collapse. In this case the scheme would fall into the Pension Protection Fund (PPF) and members would lose their ability to transfer out and potentially see a reduction in their benefits.

A DC scheme comes with the risk that the performance of the assets directly impacts the benefit you can obtain from the pension. So, a badly managed and poorly invested pension could result in that person facing a significant loss to their pension. On the flip side, a well-managed and well invested pension may improve the income that can be taken from the pension. Regardless, the investment risk sits with the beneficiary.

2. Their plans for retirement – specifically where they will live and what other financial preparations they have in place

As can been seen from the figures in the opening paragraph, the people being advised to initiate a transfer often have a significantly higher transfer value. Based on how these are calculated, the higher values typically come back for people that had higher incomes. For many of these people, they have been fortunate enough to accumulate other income generating assets through their working life, and the pension may make up a lower proportion of their retirement plan as a whole. In a case like this, people are often motivated by the fact that the money they receive once they have transferred, then becomes an inheritable asset.

For those retiring abroad, one of the key considerations may be currency flexibility. If they receive a fixed amount denominated in Pounds Sterling every month but are spending in US Dollars, their income can fluctuate significantly on the back of exchange rates. This fluctuation can make budgeting difficult and they may potentially find themselves in a difficult position.

3. What the pension represents to them in the context of their overall financial picture

As touched on above, if the member has other sources of income for their retirement, the proposition of having a large lump sum of cash as opposed to a fixed income may be more attractive. They could use this to pay down debt such as mortgages or create a trust fund for children and grandchildren.

4. How flexible they would like their pension to be 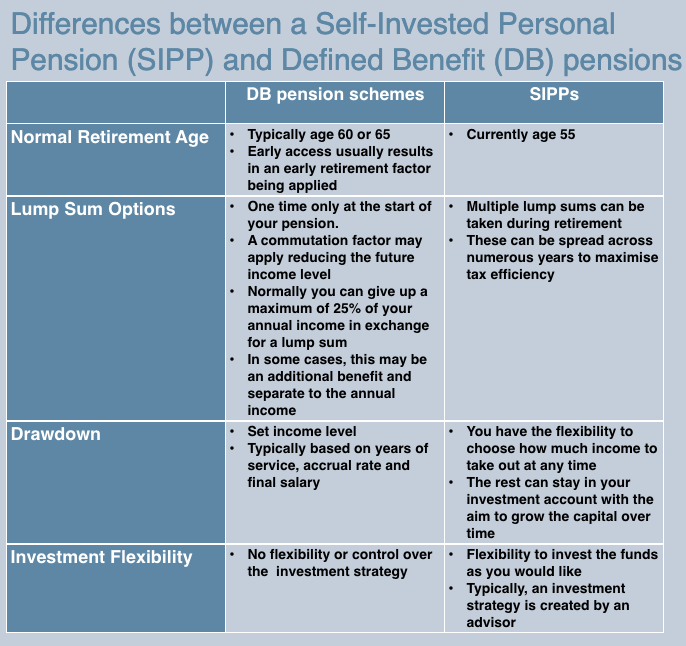 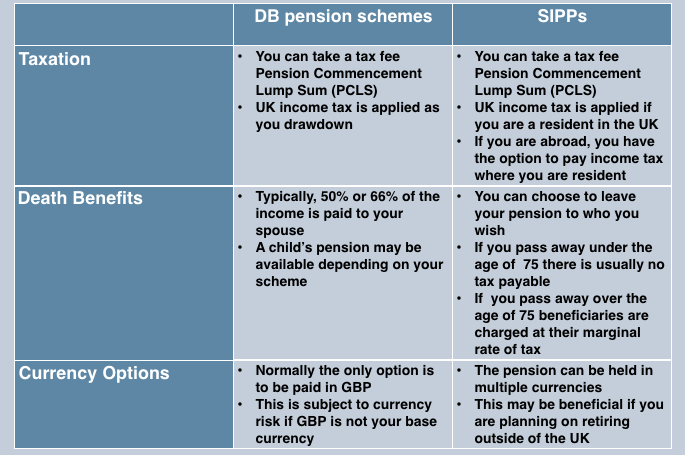 Pensions in the UK offer tax relief on the way in, but withdrawals are taxable at marginal rates. Someone receiving a fixed amount every month from a DB scheme will be liable for UK income tax regardless of where they are resident. The additional flexibility afforded from a DC scheme, alongside very careful planning, could help reduce someone’s tax liability.

Ultimately, there is no one-size-fits-all solution when it comes to transferring a pension and every case should be carefully examined. The pros and cons need to be weighed up and clearly explained so that the best outcome can be achieved. For some people the security that a fixed benefit offers is worth more than the flexibility a personal pension offers.

If you have a pension in the UK and are considering your options, get in touch with us today to speak to one of our highly trained and experienced advisors.